Hundred-year anniversary of the Cuvelier family at Léoville Poyferré 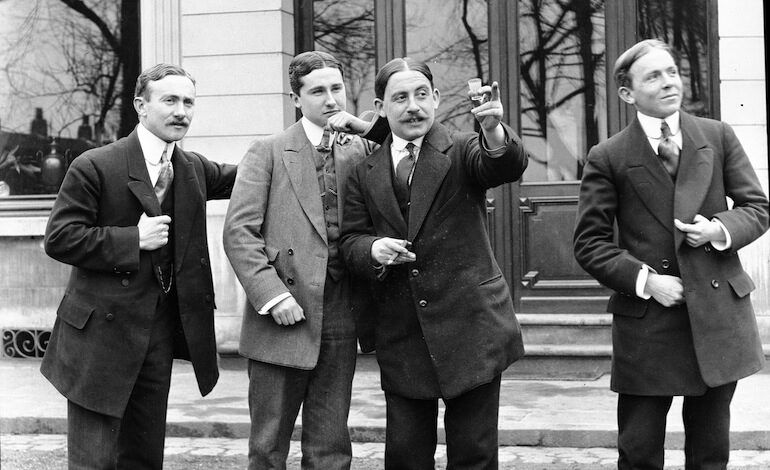 One century. For one century, the Cuvelier family, originally from northern France, have been taking Château Léoville Poyferré in Saint-Julien to new heights.
Let’s take a look at the history of this iconic estate which has withstood the test of time.

From the countryside of Northern France to Médoc gravel

In 1804, on the outskirts of Lille in Haubourdin, Henri Cuvelier founded the négociant firm H. Cuvelier et Fils.

The firm prospered throughout the 19th century, distributing French and foreign wines to enthusiasts in Northern France, Flanders and England, where Bordeaux wine was very popular.

To celebrate its one-hundred-year anniversary and flourishing business, Paul, Albert and Gonzague Cuvelier, three cousins, acquired Château Le Crock in Saint-Estèphe in 1903, followed by Château Camensac in 1912 and, lastly, Châteaux Moulin Riche and Léoville Poyferré in Saint-Julien in 1920.

The Léoville Poyferré estate originally dates back to 1638.

At the time, it was nothing but a gravelly terroir named after its owner and member of the Bordeaux parliament, Jean de Moytié.

In 1740, it was passed down by marriage to Alexandre de Gasq, Lord of Léoville, in Saintonge.

After his death, the vineyards fell under joint ownership until the French Revolution.

Léoville Poyferré was then the largest wine estate in the Médoc, stretching from Beychevelle to Château Latour.

During the 19th century, Léoville was gradually divided into three estates.

One of the family heirs, the Marquis de Las Cases, emigrated during the French Revolution, and his share was confiscated. After being sold as a “property of the State”, and subsequent transfers, the estate was repurchased in 1826 by Hugh Barton, who founded Léoville Barton.

The three wine estates, Léoville Barton, Léoville Las Cases and Léoville Poyferré, were each ranked as Second Growths in the 1855 classification.

In 1865, Léoville Poyferré was sold to Mr. Erlanger and Mr. Lalande, a wine négociant and banker respectively, before being bought by the Cuvelier family in 1920. 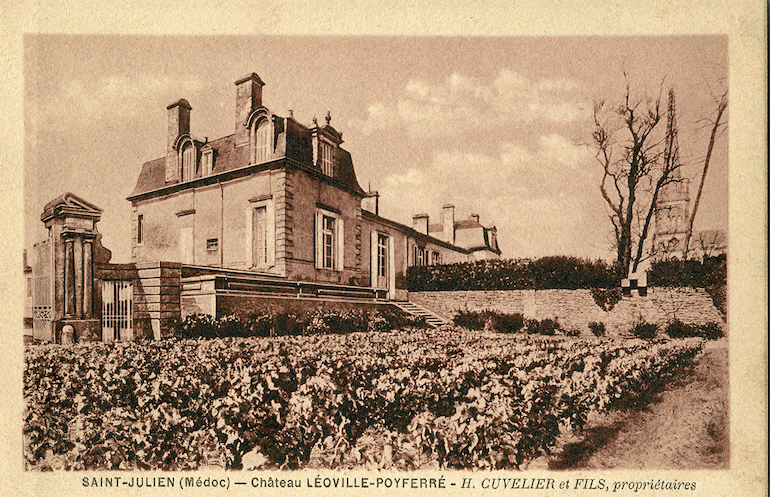 He subsequently embarked on a large-scale restoration plan to raise the quality of the wines to new heights. After conducting a detailed soil survey, he replanted numerous plots, increased the area under vine from 48 to 80 hectares, and renovated the cellar.

Several vintages went on to establish Léoville Poyferré’s reputation as a legendary wine, such as the 2009, which was awarded a top score of 100 points by the famous American wine critic, Robert Parker.

The poet Pierre Biarnez expressed his wonder at Poyferré wines as early as the 19th century, in his poem “Les Grands Vins de Bordeaux” (The Great Wines of Bordeaux), while indignantly lamenting its ranking in the 1855 classification:

“A perfect blend of richness and warmth,
From colour to backbone, it is the epitome of royalty,
And I cannot fathom which incompetent expert
Could only rank Léoville a second growth.” 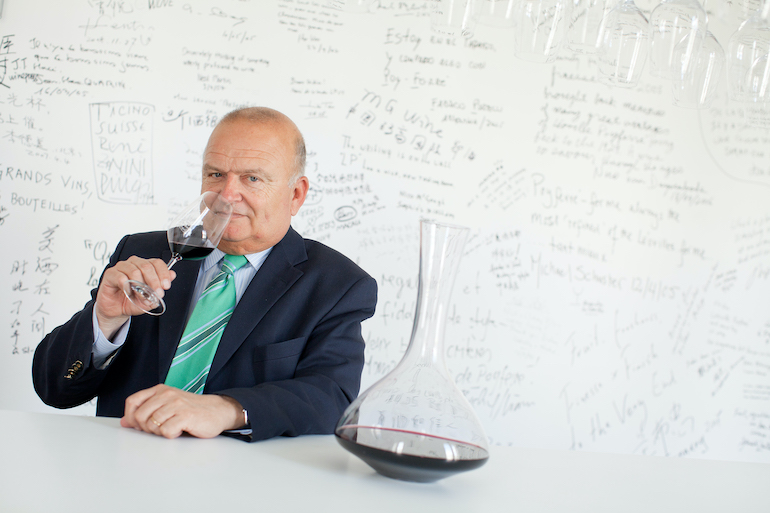 The origins behind a great wine

The Léoville Poyferré vineyards sit west of the village of Saint-Julien on a magnificent thick and well-drained gravelly soil.

The Gironde Estuary mitigates high temperatures and the risk of frost, while the Landes forest to the west provides shelter against wind and rain from the Atlantic Ocean.

This beautiful landscape is home to all the great Bordeaux grape varieties grown at Léoville Poyferré, including the predominant Cabernet Sauvignon (68%), alongside Merlot (24%), Petit Verdot (2%) and Cabernet Franc (6%).

This superb terroir naturally calls for the highest standards.

Ploughing helps keep the vineyards in good condition, without the use of weedkillers, and all manual work is meticulously carried out in harmony with nature.

The estate has been committed to eco-friendly practices since 2016, when it became a member of the first EMS (Environmental Management System) for Bordeaux wines, and obtained level 3 HEV (High Environmental Value) certification in 2017.

The grapes are handpicked and placed in small 25 kg crates, then sorted twice before being transferred to vats.

Once fermentation is complete, the wines are aged for 18 months in French oak barrels carefully selected from the 15 cooperages that supply the Léoville Poyferré estate.

For each and every vintage, a dedicated team strive for perfection while perpetuating the family’s humanistic spirit.

Oenologist Michel Rolland, who has been guiding the estate through this journey over three decades, shares his experience, highlighting that “Léoville Poyferré consistently produces great vintages thanks to meticulously tended vineyards, high-precision winemaking, and a favourable microclimate.”

He describes the resulting wines as “very round, with distinctive power and elegance characteristic of the appellation”. 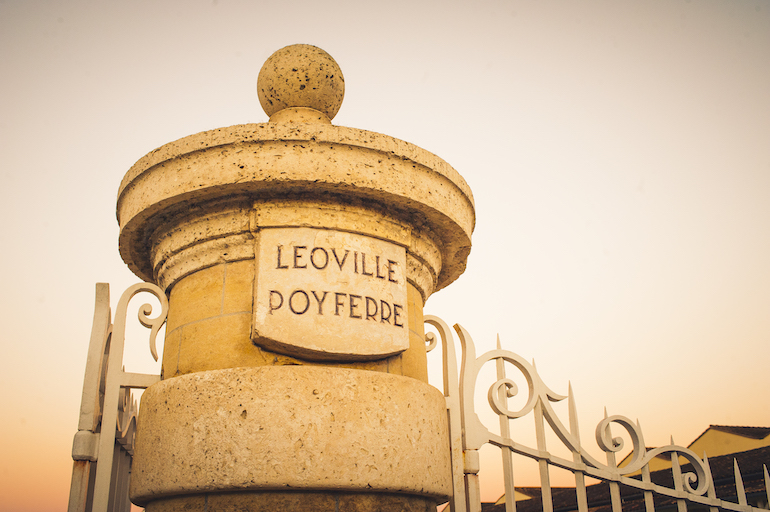 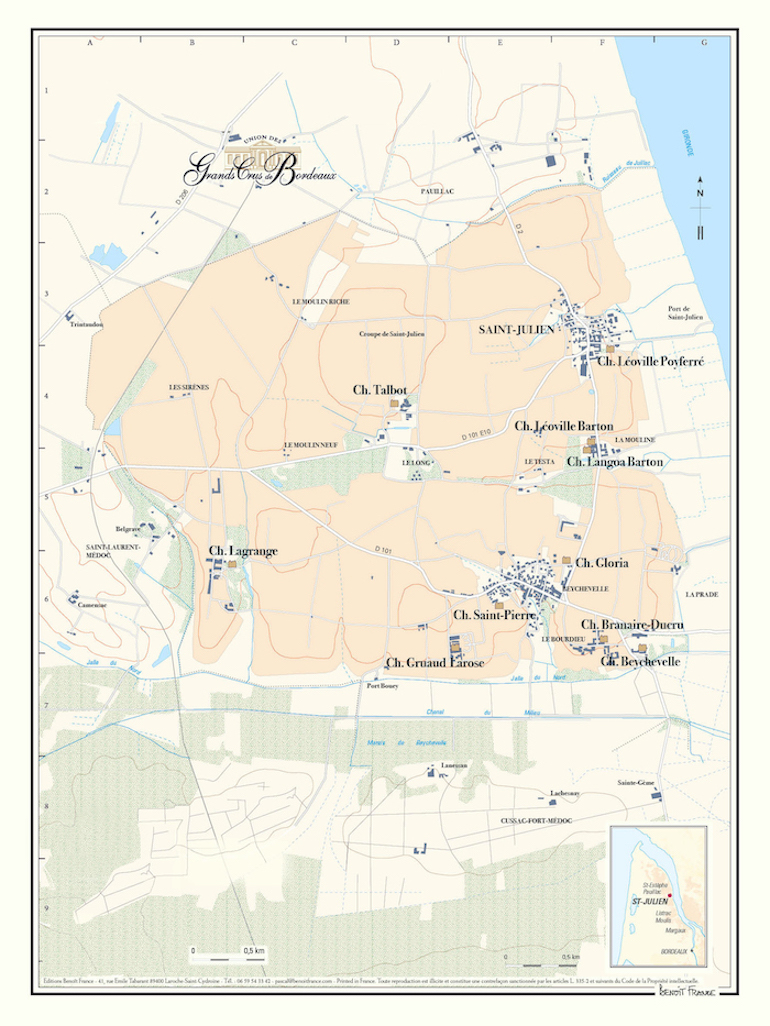 Sara Lecompte Cuvelier, the beginning of a new chapter

After many years at the helm of the estate, Didier Cuvelier handed the reins over to his cousin, Sara Lecompte Cuvelier in 2018.

The transition was carefully planned. Sara had been a member of the Château Le Crock and H.Cuvelier & Fils négociant firm management board since 2003, and that of the Saint-Julien estates since 2011 (Moulin Riche and Léoville Poyferré).

After completing a Bachelor’s degree in Economic and Social Administration followed by a course at the Institut de Gestion Sociale in Paris, Sara worked as a Human Resources Director for various large-scale catering firms before moving onto operations management.

She later reconverted to a specialised Master’s degree in wine estate management at the Bordeaux Sciences Agro Engineering School, before obtaining a University Diploma in Wine Tasting Aptitude.

Sara Lecompte Cuvelier’s arrival signals a new chapter in the estate’s history. Her ambition? To continue her family’s unwavering commitment and high standards in the quest for outstanding quality, while always respecting the environment, and further enhance the estate’s reputation.

By entrusting the destiny of their estate to another family member, the Cuvelier dynasty once again demonstrated its deep-rooted attachment to this historic terroir.

The great leap to Argentina and opening to wine tourism

Open to the world, the Cuvelier family pursued their travels south at the turn of the millennium.

This time, they crossed the Atlantic Ocean to reach Argentina.

There, they created the Cuvelier Los Andes bodega, managed by Bertrand and Jean-Guy Cuvelier.

They produce wines from a blend of Malbec, Argentina’s signature grape variety, Cabernet Sauvignon, and Syrah grown on a high-altitude terroir on the Andes foothills.

Meanwhile, at Saint-Julien-Beychevelle, the family were among the first winegrowers to open their doors to the public and offer original hospitality packages, under the direction of Anne Cuvelier.

Thanks to tailored tours, wine enthusiasts are invited to discover the vineyards, the cellar and the philosophy behind this legendary estate.

Innovative “eye-opening” tastings are the highlight.

The results are mind-blowing!

In 2020, major events in France and abroad were planned to celebrate the hundred-year anniversary of the Cuvelier family.

They are currently on hold as we wait for better days ahead.

That is why the Union des Grands Crus de Bordeaux wanted to pay tribute to the odyssey of this family who, driven by the values shared by all of our members – audacity, integrity, transmission – has contributed a remarkable chapter in the great history of the Bordeaux wine region. 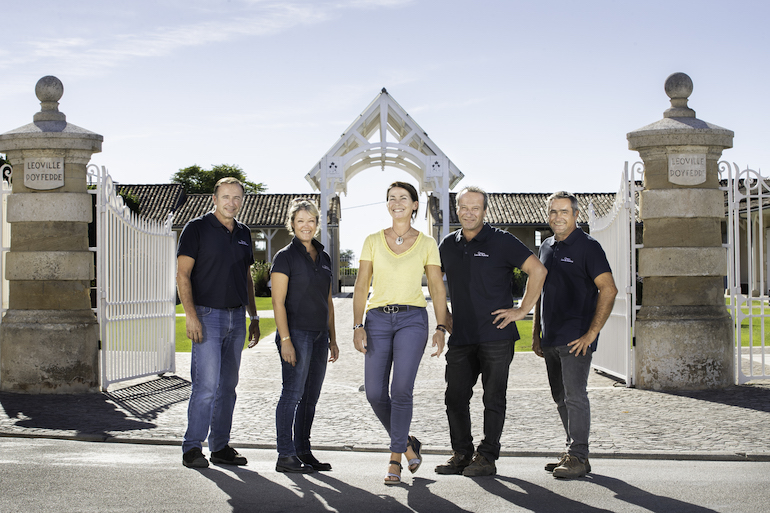 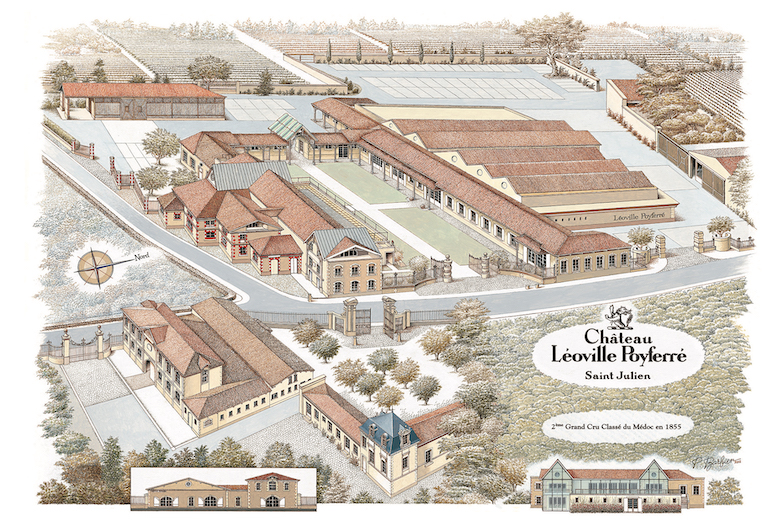 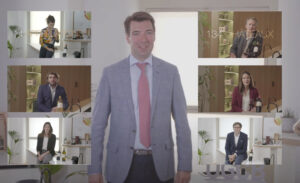 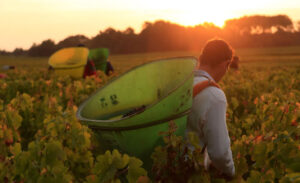 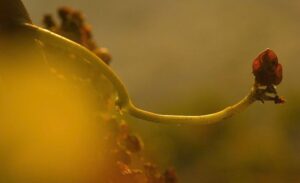